[from the Polish Cultural Institute] 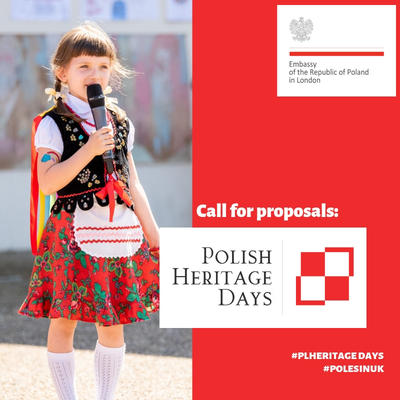 The aim of the Polish Heritage Days is to celebrate Polish Day and Poles Abroad Day and Polish Flag Day on May 2, and May 3rd Constitution Day as well as to promote Polish culture, heritage of past generations, and Polish contribution to cultural, economic, and social life of the United Kingdom. And, to emphasise the positive role that the nearly one-million Polish community has played in the United Kingdom in the recent years.
Polish Heritage Days will be inaugurated on May 4 and 5, 2019. We encourage all Polish and British organisations and institutions to organise cultural events and projects throughout the month of May in order to promote and share the richness of Polish culture and heritage and the contribution of the Poles to local communities.

– I encourage all, Polish and British organisations and institutions alike, to host cultural events and projects throughout the month of May in order to promote and share the richness of Polish culture and heritage within your local communities. By showcasing the values which are important to us, such as openness, tolerance, civic engagement and friendliness to our neighbours, we not only challenge the stereotypes but also demonstrate to our local communities how much active civic participation is important to us as a nation – H.E. Ambassador Arkady Rzegocki wrote in his letter.

This year, just like last year, the official symbol of Polish Heritage Days is a white and red checkerboard, which is a symbol used by Polish pilots fighting in the Battle of Britain, and now, thanks to promotional activities of the Polish Embassy in London, it has become a hallmark of Poles in the UK. Polish Heritage Days will be promoted on social media channels with a hashtags: #PLHeritageDays and #PolesinUK.

Last year, over 80 events were organised in 65 cities across the UK, attracting nearly 40,000 participants. During this year’s edition of Polish Heritage Days, just like last year, organisers can count on material support from the Polish Embassy and help in contacting local authorities as well as local media in order to promote the celebrations.

The role of the Polish Embassy in London is to synchronise and coordinate the celebrations organised by Polish and British organisations, schools and parishes in the United Kingdom under a single slogan to strengthen the message and reach a wider audiences.

Dr Julia Secklehner is an art historian specialising in Central European art. She has earned a PhD at the Courtauld Institute of Art in London and studied Czech and Art History at the University of Glasgow. Currently, she is based in Brno and works on a research project about interwar Central European art and architecture at Masaryk University.More posts from Julia Secklehner