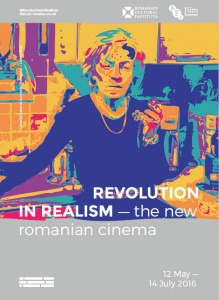 ‘In recent years Romanian films have won prizes and praise a-plenty: it’s time to explore what makes them so special! The Romanian Cultural Institute in London an the British Film Institute proudly announce the opening of ‘Revolution in Realism: The New Romanian Cinema’ – the biggest showcase of Romanian cinema ever to have taken place in Britain, and possibly beyond. Do not miss a month of screenings and special events, in the company of some of the filmmakers who made the Romanian cinematic miracle possible.

This season is preceded by The Forerunners, a series of special screenings at RCI London’s Romanian Cinematheque focusing on the creative antecedents of the New Romanian Cinema – 12, 17, 25 & 31 May; full programme here.

The programme continues at the Romanian Cinematheque with Extra Screenings on 7, 11 & 14 July.

“The programme of this season still leaves a lot to be discovered, understood, and loved. It exhausts neither the subject of Romanian cinema, surprising and diverse as it is, nor the world from which it emerges. Our culture can offer, and will offer, more revelations. But for the moment, let us enjoy these films and promise ourselves to see each other again at the next revolution.” – Dorian Branea, Director of the Romanian Cultural Institute in London

“The month-long season of films I have curated for BFI Southbank – which also includes a retrospective of the films of Cristi Puiu and a run of Radu Jude’s extraordinary ‘Aferim!’ – is at once a recognition and a celebration of the remarkable flowering of Romanian filmmaking since the start of the century.” – Geoff Andrew, critic, programmer and lecturer, and curator of the BFI Southbank’s season of recent Romanian film

‘Revolution in Realism. The New Romanian Cinema’ is organised by the British Film Institute (BFI) in partnership with the Romanian Cultural Institute in London.

Institutional partner: Embassy of Romania to the United Kingdom

For a limited time only, our friends at the BFI are offering a SPECIAL DISCOUNT (buy one ticket – get another one free!) when booking any of the films in the ‪#‎RevolutioninRealism: ‪#‎TheNewRomanianCinema season. Just quote ‘Romanian241’ when booking on-line, in person or over the phone on 020 7928 3232. Please note that the offer doesn’t apply to the ‘Aferim!’ Opening Gala on 7 June and the special events.’ (RCI)