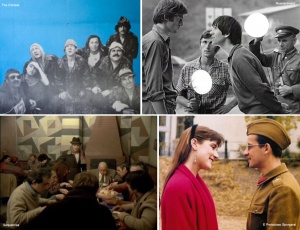 ‘Revolution in Realism: The Forerunners

As a prelude to the biggest retrospective of Romanian film ever to have graced the British screens, the Romanian Cinematheque in 1 Belgrave Square runs a series of special screenings focusing on the creative antecedents of the New Romanian Cinema.

Join us for a month of timeless films that will wet the cinephiles’ appetite for much more to come!

This major project is organised by the British Film Institute (BFI) in partnership with the Romanian Cultural Institute in London. Full programme and supporters to be announced soon.

Revered director Dan Piţa turns an orientation contest in a forest into an ordeal of psychological suspense and, ultimately, an ironic allegory and a subtle satire about the communist regime. What starts out as a simple expedition becomes complicated when the group hears a mysterious cry for help and decides to ignore it rather than veer off course.

“The Contest is undoubtedly one of the most profound Romanian films ever made.” – International Film Guide

Considered by many as the great masterpiece of Romanian cinema, banned in 1970 shortly after its release, Reenactment is a fierce criticism of repression, indifference to human dignity and misuse of power. The film tells the story of two friends who, for educational purposes, are forced to reenact a trivial crime they committed, which leads to real tragedy.

“Reenactment stands among the exemplary works of its region and time. Subtle, difficult and brave, it represents a powerful statement of artistic honesty in a culture of official lies and evasions.” – New York Times

Alexandru Tatos is a groundbreaking figure of Romanian cinema and an essential inspiration for the contemporary Romanian directors. His compelling drama Sequences, a film about a film, follows the tragicomic vagaries of a film crew in a time of repression. Three ‘sequences’ which could have formed separate stories are linked together to give a larger perspective on the nature of reality and film.

“Full of provocative political metaphors, Sequences is a powerful meditation on the role of the arts in rigidly controlled society.” – Film Society of Lincoln Center

Critically acclaimed Nae Caranfil’s debut feature brings out an ironic, witty and realistic image of Romania during the last years of communism. Considered to bridge the gap between the ‘old’ and the ‘new’ Romanian cinema, E Pericoloso Sporgersi is the intriguing and humorous story of three Romanians whose lives are revealed to be strongly intertwined as the film progresses.

“A deceptively casual comedy which can also be read as a ‘slice of life’ including school, the military service and the travelling players’ milieu, E Pericoloso Sporgersi is extremely rigorous in its construction.” – Dominique Nasta, author of ‘Contemporary Romanian Cinema: The History of an Unexpected Miracle’

All films screen in Romanian with English subtitles.

The Romanian Cinematheque is a permanent programme developed by RCI London in partnership with the National Centre for Cinematography (CNC) and Dacin Sara.’ (RCI)